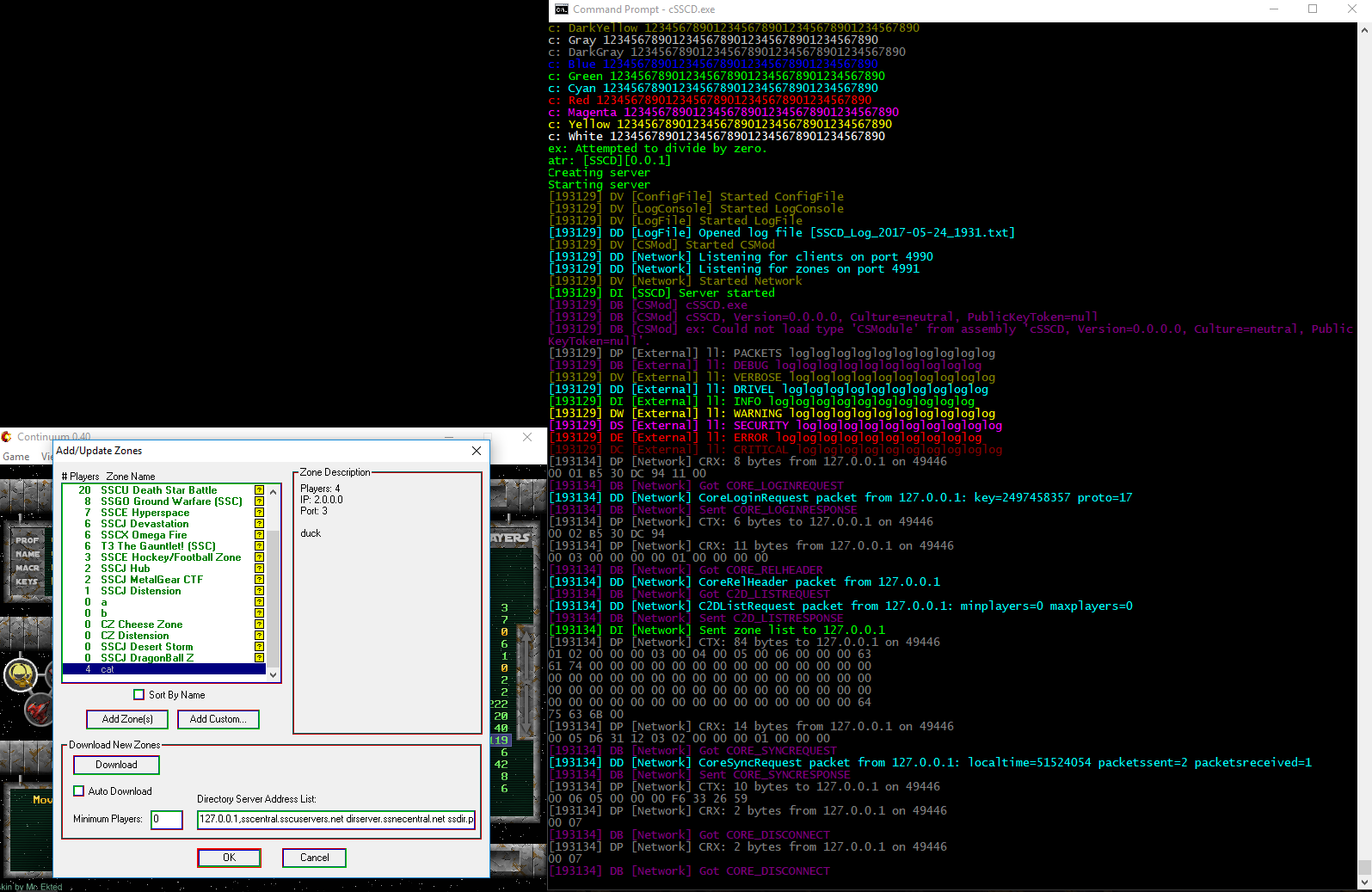 depending on how bored i get, i will eventually write a biller, then a zone server replacement, then a client as i did with the C project.

it currently loads modules from DLLs, has an ini config file, etc, just as ASSS does.

when it is ready enough i will put it up on a bitbucket somewhere with code for a tutorial custom module.

the important part is that using C# instead of C saves a bunch of time since you dont have to mess around with pointers and get segfaults and crashes every time you want to print text.
also yes C# does run on the .NET core, but its not the garbage it was 10 years ago, it runs on mono, and microsoft just made a full featured bash shell on windows, meaning this stuff will run on windows, mac, and linux with not much extra effort.

equally important, it makes it way easier to tap into DLLs like the steam API in making a steam powered biller.

did this thing over a couple of hours in 4 days. Mine GO BOOM - Fri May 26, 2017 3:15 pm
Post subject: So, link to github/etc? Cheese - Fri May 26, 2017 6:41 pm
Post subject: not up yet until it is in a state that can be deployed into a minimum of operation out of box and until i get it cleaned up into a state other people would actually want to use, because i am still shuffling code around and splitting overly monolithic files

as an example i still have not split the net.cs file into the net.cs proto_dir.cs proto_core.cs directory.cs files in the same way that i did with the C project yet

not really in a rush to publicly release code since i expect just as before people just wont give a shit, because it is years later and still noone has wanted to do anything with the C project despite its far reaching effects to revitalize ss


anyways, i expect this to be pretty much finished within a week or 2
i also plan to harvest the core and start on a C# biller, which I will also again be using with a mySQL DB
the ssc netops asked me about the C biller and actually got as far as preparing to migrate ssc for steam launch and set up a linux server and compiled it, so I am guessing they will still probably be interested/
also C# seems to be better for a biller since it has exception handling and wont crash every 4 seconds.
which is great because C# also doesnt crash every time you want to combine 2 strings like C does


on a semi related note, i added more log constants: